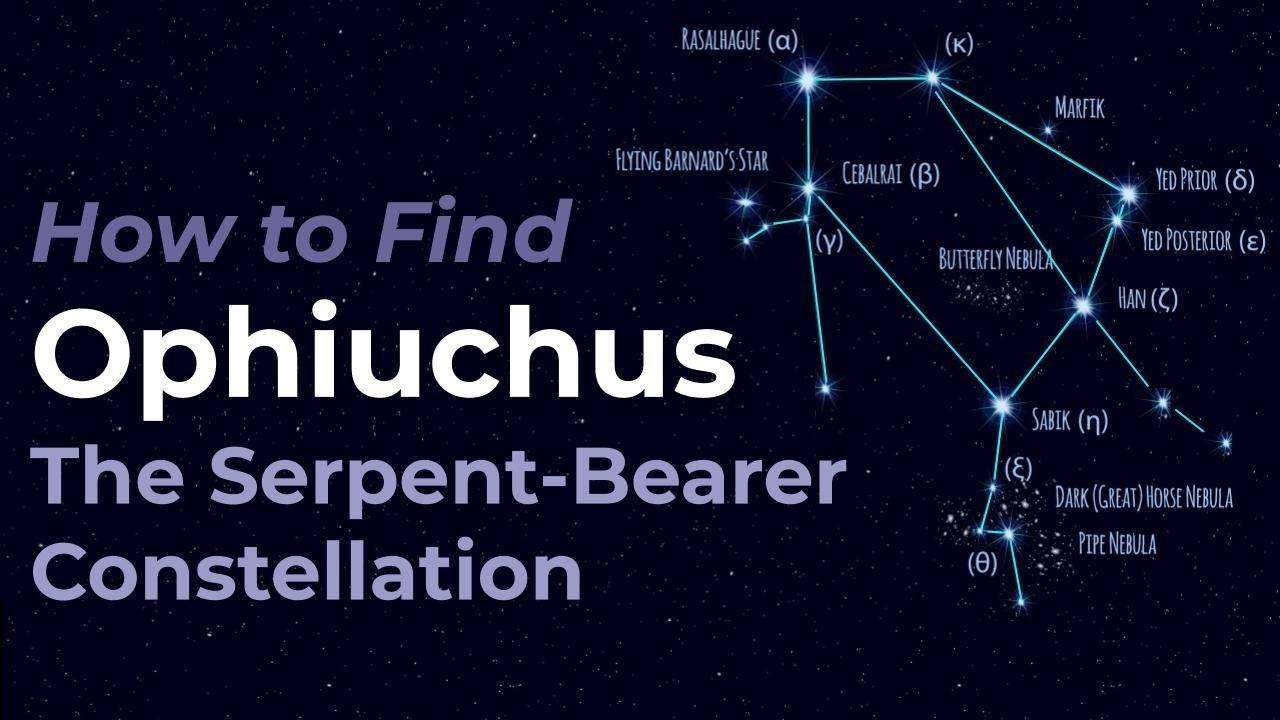 Ophiuchus is a constellation that the new stargazer may not have heard about before.  A few years back, I had a student tell me the Ophiuchus (pronounced o-fee-OO-kus) is the ‘13th sign of the Zodiac’. At the time, I was not aware of the specifics of this constellation, so I did a little research to discover what he meant by this and I wanted to learn how to find this star pattern.

As I researched this constellation, I learned that it could be classified as a zodiacal constellation in the sense that the sun does pass through its boundaries, but it really isn’t considered one of the signs of the zodiac.  We come to the point where the lines between astronomy and astrology can be blurred.  These two subjects once had a common origin, but since the Enlightenment period in history, these two topics have diverged.

The subjects of astronomy and astrology are different.  Astronomy is the study of the objects outside Earth’s atmosphere, including planets, asteroids, dwarf planets, exoplanets, star clusters, galaxies and much more. Astrology is considered a pseudoscience in which the celestial objects beyond Earth’s atmosphere influence events on Earth and even human affairs. There are numerous articles on this subject, and my favorite being from Mr. Phil Plait, a scientist who has made a career out of debunking common scientific misconceptions (see article titled: No, NASA didn’t change your astrological sign). The sun spends about two weeks passing through this constellation in December. I was surprised to learn that the sun spends more time in the boundaries of Ophiuchus than it does in Scorpius! The sun only spends 7 days passing through Scorpius.

Ophiuchus is a large constellation that has a wide variety of celestial objects that sit within its boundaries, including globular star clusters, planetary nebulae, and my favorite, the Rho Ophiuchi Cloud Complex.  Most of these objects are not able to be seen unless you have magnification, so try looking at this area of the sky with a pair of binoculars or a telescope.

Try seeking out a dark sky in order to find this constellation. Some new stargazers like to use phone apps for assistance when trying to find the constellations.  I am a bit more of a traditionalist in the sense that I like to use just my eyes to find the stars.  It is really hard to translate the HUGE sky onto a tiny phone screen.  Before I break out a stargazing app, I always refer to a star map. If I can’t figure out what something is, then I check a star map again and again until I figure it out. I had to do this quite a bit with Ophiuchus to make sure I could interpret what I was seeing.  I was also able to find Ophiuchus more easily when the Moon was absent.  Many of the stars in Ophiuchus are of third and fourth magnitude, so any type of light pollution, whether natural or artificial, should be avoided when looking for star patterns.

I wish you luck trying to find Ophiuchus. Remember that stargazing takes time and patience. Every time I go outside, I always find something new and sometimes something unexpected, like a meteor or satellite. Enjoy the beauty of nature and keep looking up!